Timothy Bruno is a former Kona coffee farmer and longtime fan of coffee. He spent most of a decade on the Big Island of Hawaii, where he produced award-winning coffee on Luana Farm and founded and managed the South Kona Green Market which was recognized by one national publication as the best farmer’s market in Hawaii. He and his wife also started and continue to run what he calls his “side-hustle that became my day job,” Luana Naturals Handmade in Hawaii Skincare.

While in Hawaii, he rediscovered his childhood joy of writing, penning several articles for the West Hawaii Today newspaper about the burgeoning maker’s movement and “Buying Local for the Holidays.”  Two additional articles he wrote about his farmer’s market were published in Ke Ola Magazine, an island lifestyle publication. Thanks to Facebook, he still is in contact with the farmers’ organizations on the Big Island of which he was a member. He once had a nice paragraph about Ted Williams in Baseball Weekly and now writes at Procaffeination.com.

After growing up in Cleveland and Lakewood, Ohio, Tim graduated with a degree in Speech/Communication from The College of Wooster where he studied Chemistry before P-Chem convinced him to switch his major. He has an entrepreneurial mindset and a scientific worldview but also has a sense of humor and a mild addiction to history, popular culture, and trivia.

His children, Mia and Oliver Kriebl-Bruno are pursuing their degrees in London and Rotterdam, respectively and Tim is currently Living a French Life in southwest France with his wife, Karen Kriebl, and their dogs and cats. He can be contacted most easily at tim@procaffeination.com.

All I've ever wanted was an honest day's pay for an honest hour's work.

This site is a participant in the Amazon Services LLC Associates Program, an affiliate advertising program designed to provide a means for sites to earn advertising fees by advertising and linking to Amazon.com. We are compensated for referring traffic and business to Amazon and other companies linked to on this site as well as for any items sold directly on this site or in the associated "stores" on Etsy, eBay, etc. 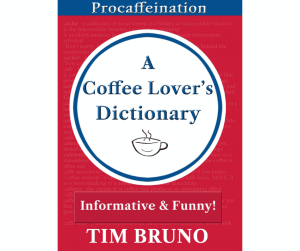